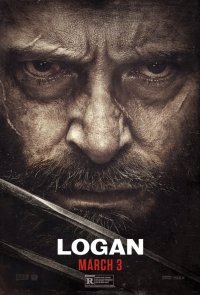 Logan, a member of the X-Men, is a limousine driver earning money to support himself and the ailing nonagenarian Professor Charles Xavier. In a world where mutants seems to be extinct, Logan now has diminished healing ability and the adamantium in his body is slowly poisoning him. He met a woman and a little girl asking for his help transport them to North Dakota. She said a group is following them and wanted the girl. Who is this girl and what would be Logan’s role in the future of mutant kind?

I will try not to spoil that much. You’ve been warned.

I actively ignored all spoilers and trailers so I came to cinema with the expectation that this is a continuation of the X-Men franchise. I was disoriented at first because it was set years after the X-Men/Wolverine/Deadpool movies with no direct mentions of those films in the first few minutes of this movie. I decided to ignore everything and just consider this as a stand-alone movie in a parallel [fictional] universe. I enjoyed the movie after that.

The familiar characters we have here is of course the titular character Logan played by Hugh Jackman. He said in numerous interviews that this would be his last portrayal as Wolverine. After watching the movie, and if this would be his last, it would be the end an era. In this movie Logan has diminished healing ability. Because of that, his age is now showing, he became sluggish, his claws that does prop out on command. Clearly, the adamantium is slowly poisoning him.

Sir Patrick Stewart reprises his role as Professor Charles Xavier. In this movie he have a degenerative neurological condition. He frequently have seizures with a disastrous effect to everyone around him. Imagine, the world’s most powerful mind is sick? You get the picture.

Also in this movie is Caliban, a mutant tracker and sensitive to light, played by Stephen Merchant. We last saw Caliban in X-Men: Apocalypse but with a different actor.

New is this movie is Laura, played by Dafne Keen. She is designated as X-23 by the a sinister group that turns mutants into weapons. This group wanted her and the rest of the escaped children back.

Cinemas might classify this an action film but really it is not, for me at least. Sure it has action sequences but this is a drama piece. While I like those sequences, I loved the drama presented. The interaction of Logan, Laura, and Charles tugged my heart strings. The revelation of what happened to the X-Men is thought provoking. Then, the events towards the end. I will not spoil.

Some say that this movie is based on the comic book story “Old Man Logan“. Well, the similarity is that Logan is old. This movie is more in line with the origin story of X-23.

With the success of this movie and Deadpool and the lukewarm reception of the other recent X-Men movies, I am not entirely sure how the X-Men movies should continue. I am still hoping that this franchise will find their way.

“Nature made me a freak. Man made me a weapon. And God made it last too long.” –Logan